Newcastle-based engineering consultancy Cundall demonstrates its commitment to sustainability with an ambitious target of One Planet Living.

A striking newspaper headline in December caught my attention. It suggested that 2016 will be the year that consumers stop caring about sustainability (1). After all the hype around the climate summit in Paris, how could people start to switch off so soon? Yet the journalist made a compelling case for why the geopolitical situation that we find ourselves in now, coupled with shocks to consumer confidence from the VW Dieselgate scandal, mean that the environment is likely to be pushed further down the agenda. This impacts on business decisions around Corporate Social Responsibility (CSR). As market interest wanes, corporate sustainability commitments are harder to justify.

Thankfully, there are some organisations that understand the bigger picture and the longer term advantages of conducting their affairs sustainably. One such company in the North East is Cundall, a multi-disciplinary engineering and design consultancy. Established 40 years ago, Cundall now has 600 staff operating from 20 offices around the globe. In 2010 they started a journey towards One Planet Living certification and are now the only consultancy firm to achieve the status. 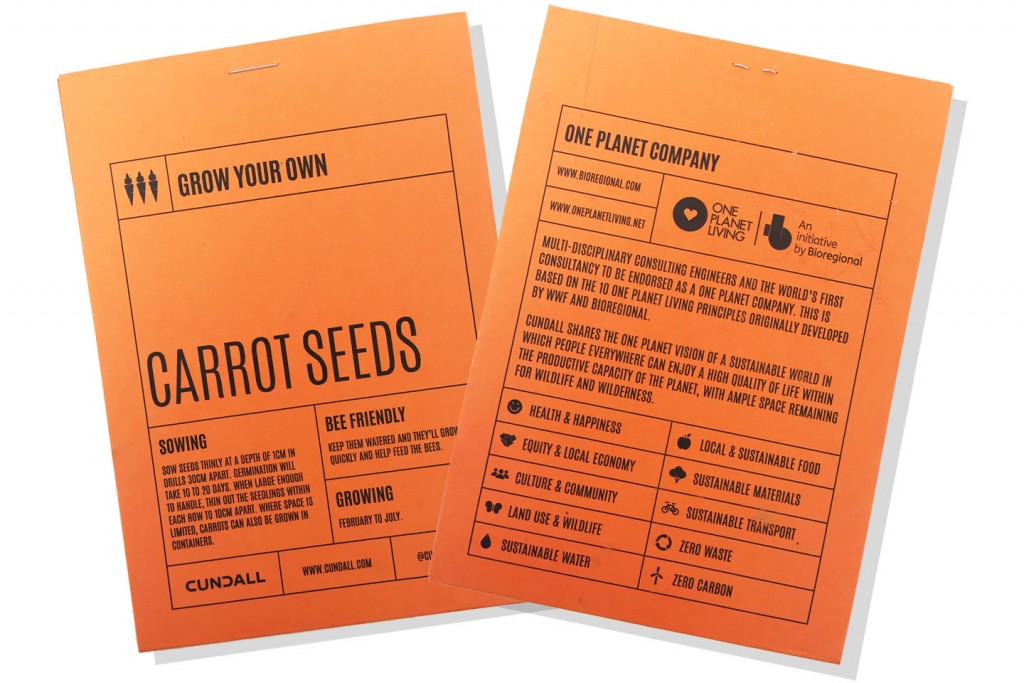 I first heard about Cundall’s One Planet Living story at a breakfast seminar in September. The talk was given by Mariana Trusson, Senior Associate and Head of Sustainability for Scotland and the North East, at their HQ in Newcastle. Having been to countless seminars over the years, I’m used to the plethora of branded pens and notepads on offer as companies seek to make a lasting impression on delegates. Mariana, on the other hand, gave everyone a packet of carrot seeds to plant. Encouraging people to consider their own relationship with food production and the environment is just the sort of creative thinking that makes One Planet Living so different from mainstream sustainability methodologies. 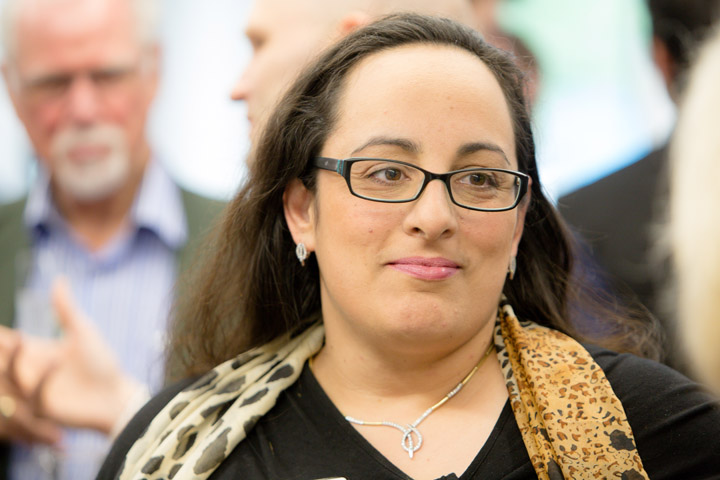 Mariana Trusson, Cundall’s Head of Sustainability for Scotland and the North East

I met up with Mariana to find out more. She started by explaining the practical vision behind One Planet Living. It envisages a world in which people everywhere can enjoy a high quality of life within the productive capacity of the planet, with ample space remaining for wildlife and wilderness. The fact is that the lifestyles most of us lead in the developed world can only be sustained by three or more Earths. The comfort that we enjoy is offset by the ultra-low consumption of poor communities around the globe, but even this isn’t enough to stop rampant carbon emissions and damage to the biosphere. 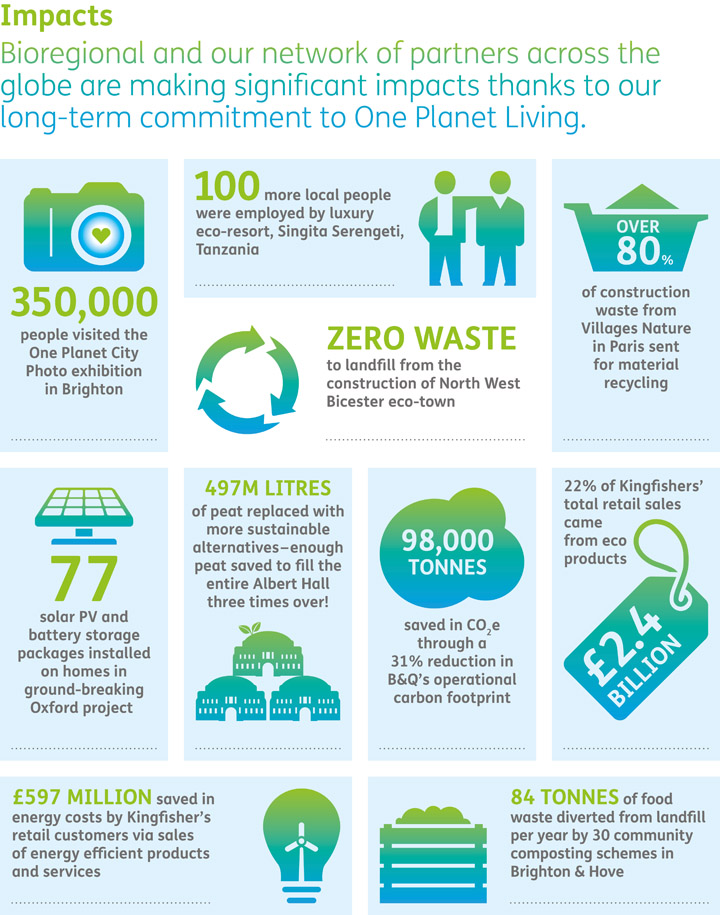 Infographic showing impacts of Bioregional’s One Planet Living scheme across all partners.

The scheme, which is managed by Bioregional, aims to make sustainability attractive, affordable and above all, understandable. Living within the planet’s means might sound intangible, but Bioregional breaks it down into 10 One Planet principles which are rooted in the science and metrics of ecological and carbon footprinting. Mariana explained how Cundall spent the first year measuring their current impacts against these 10 principles. The second year was about setting targets and from year three onwards they have been focussing on making step-by-step progress towards their 2025 goals. These ambitions include reducing water consumption in their offices by over 30%; reducing the amount of meat and fish purchased by 60%; reducing waste by 30% and meeting 100% of their office energy demand with renewable sources. 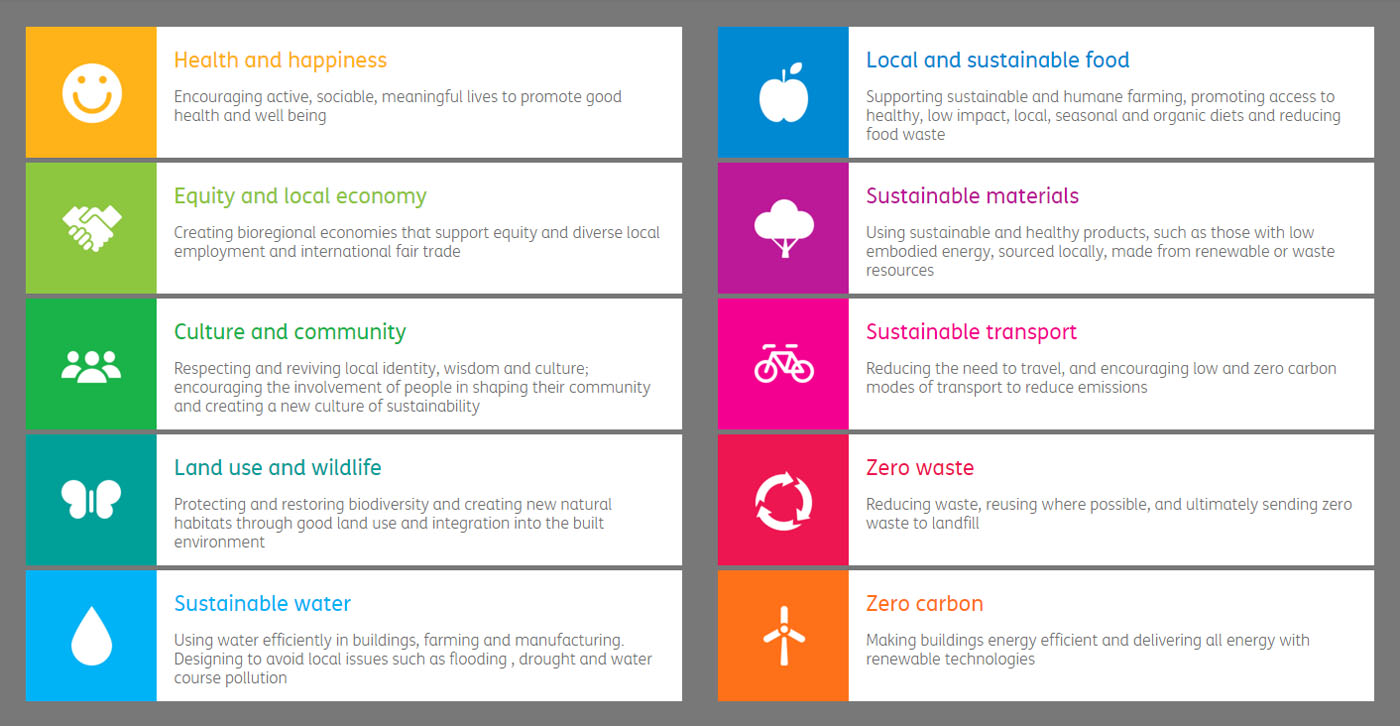 Mariana is dismissive of other schemes such as BS14001 which, she feels, can encourage a ‘cut and paste’ approach to CSR. She was keen to stress how the One Planet Living status, though driven by senior management, has involved all employees. There is a healthy competition between Cundall’s various offices to outperform, but the process doesn’t stop at the office door. They use their intranet to share advice and encourage people to take the 10 One Planet principles home with them. For example, they loan out a thermal imaging camera so staff can make targeted energy efficiency improvements to their houses.

Sustainable transport was a hot topic for Mariana, something I’ve recently covered here at Tracing Green. Across the whole organisation, only a quarter of staff commute to work by car, and their Newcastle branch is the only Cundall office to have onsite parking. A quirk of the property they lease, they’re trying hard to encourage alternative commuting options. They prepare personalised transport plans for staff, support a cycle-to-work scheme and compensate staff who make use of public transport. Mariana herself commutes between home and her Edinburgh office by bus, and twice a week to Newcastle by train. 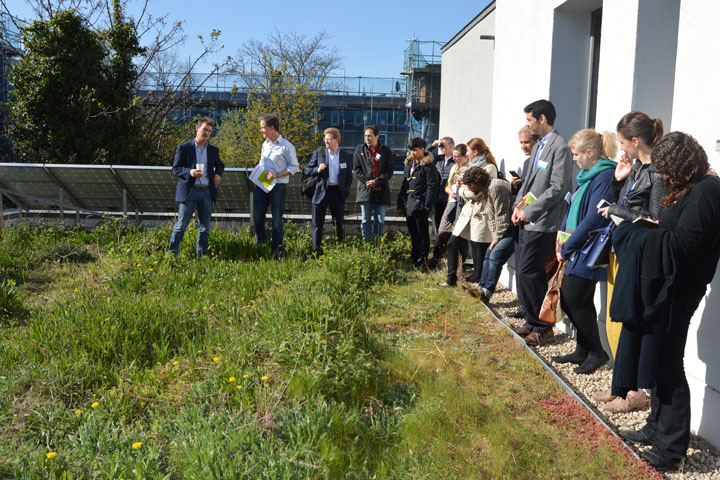 “It changes the way we talk to our clients,”Other principles include Culture and the Community, and Equity and Local Economy. Cundall support local producers where possible, such as engaging small local catering firms. Similarly, their reception has the work of local artists for sale. An outreach programme has seen staff volunteering with environmental clean-up days in the Ouseburn. Of course we shouldn’t forget that Cundall are an engineering and design consultancy, and the One Planet Living principles play an important role in their project work. “It changes the way we talk to our clients,” says Mariana. It’s not always easy to get clients to ‘buy-in’ to sustainability in the same way, but teams hold design reviews using the 10 principles as a framework for sustainability decision-making.

As our conversation draws to an end, Mariana reminds me of that breakfast seminar and the carrot seeds. She points out that telling their One Planet Living story is a vital part of the journey. Sharing it may be good for publicity, but it’s also about spreading those 10 principles far and wide. 2016 may well be the year that consumers stop caring about sustainability, but businesses who take the long view will emerge stronger in the coming years.

You can take Bioregional’s One Planet Living Challenge, and calculate your own footprint, here.

Images courtesy of Cundall except Carrot Seed image by Tracing Green, and Infographics courtesy of Bioregional.