Cohousing allows communities to meet the challenges of modern day life in a sustainable way.

Earlier this month I joined an inspiring group of people for the ‘Cohousing Durham’ Day School. Working in collaboration with Durham University’s Department of Geography, Cohousing Durham organised the event to explore what cohousing is and how it can be developed in County Durham. 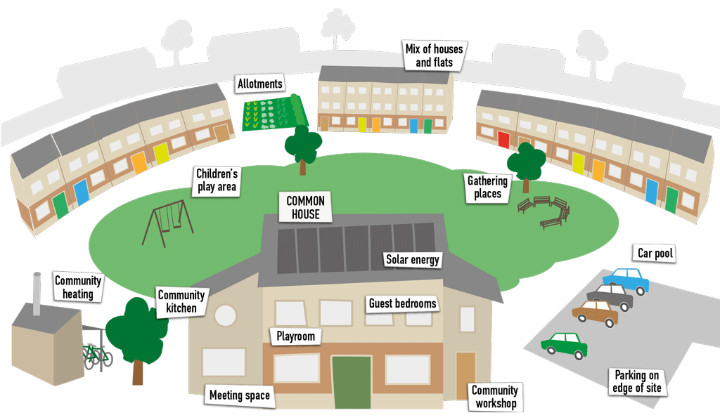 What is Cohousing, by UK Cohousing Network.

Cohousing has been around since the 1960s and today there are 20 successful cohousing communities living in the UK, with a further 70 groups in the development stage. The group Cohousing Durham was set up in 2013 to explore ways to build that maximises sustainability and sociability in the county. The five individuals at Cohousing Durham’s core have already laid the foundations for success by forming a ‘company limited by guarantee’, the most common legal vehicle for delivering cohousing. They’re now looking for new members interested in joining the group which could build up to 25 houses.

The Day School brought together a range of speakers to share their expertise and experience. Architect, Passivhaus expert and contributor to this blog, Mark Siddall gave an introduction to sustainable homes and the problems with the current housing industry, notably the all too familiar gap between the design of new homes and their real performance. Whilst stressing that the Passivhaus standard doesn’t tell you how to live, it does bring certainty to a building’s performance particularly where indoor air quality is concerned. Of course cohousing doesn’t have to focus on new-build homes and later in the day, Adrian Cantle-Jones, Area Regeneration Manager for Durham County Council, talked the audience through his experience of retrofitting older houses in the county. A programme of external wall insulation and PV installations had breathed new life into a number of colliery villages. 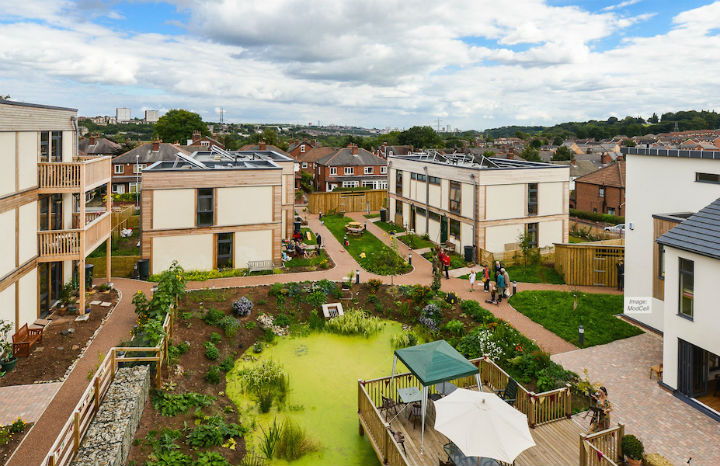 Artist Julia Heslop expanded on the social role of self-building as she talked through her recent Protohome project in Newcastle. Working with homelessness charity Crisis, she mentored a group of young people who designed and built their own project using the self-build techniques pioneered by Walter Segal in the 1970s. ‘Learning through building’ was key for Julia who believes that the social impacts of housing are always overlooked by governments. Fiona Hennell, a postgraduate researcher at Durham University reiterated the social benefits of cohousing following her study of five groups. She gave an insight into the challenges of consensus when setting up and later living within a cohousing community.

The co-operative model of housing offers a glimmer of hopeIn keeping with the spirit of cohousing, everyone had been asked to bring food contributions for sharing out at lunchtime. The break gave me a chance to catch up with some of the five members of Cohousing Durham to talk about their aspirations. Alyson Learmonth explained how they want to attract people of all ages with units of varying size and with a mix of tenure, all built to a high environmental standard. There will be common areas including a dining room and a shared garden. They’ve been looking at one possible site near Durham, but will consider others as they become available. Of course finding land remains the biggest challenge for cohousing groups.

After lunch, Eileen Sutherland from Straw Works gave a rundown on building with straw, much of it familiar from the course I did with Straw Works last year. Eileen stressed how building with straw can be manageable for self-builders with some simple training, and this direct engagement in the building process echoed the themes of several earlier speakers. The LILAC cohousing project in Leeds was built using the Modcell straw bale system, and the day was rounded off by Jim Reed who was involved with the scheme. His company COHO are facilitators and project managers for cohousing groups and he gave a rundown on how to get from the talking to the doing. The particular challenges faced by most groups is finding land and then raising funds for the early stages.

I was impressed with the optimism of those present which seems at odds with the gloom of the housing crisis. In his introduction to the day Councillor Mike Dixon, who is involved with the housing portfolio at Durham County Council, said that, ‘The co-operative model of housing offers a glimmer of hope,’ and he urged those interested in cohousing not to underestimate the influence that they can bring to housing development in the region. At Tracing Green, we will stay in touch with Cohousing Durham and follow their journey with interest.