A coalition of green groups across the North East is planning the region’s largest Climate March to coincide with the Paris COP21 summit.

For the third of our articles on climate change in the lead up to the Paris summit in December, I’ve been investigating the work being done by campaigners in the North East . A few months ago, I’d have struggled to name more than a couple of groups in the region calling for a tougher response to global warming. That was until I started digging around and what I found astonished me. The North East has nearly 40 different campaign groups led by green champions, all trying their best to drive this burning issue up the agenda.

Last week I travelled through torrential rain and raging wind to reach Gallery 45 in Felton. The forboding weather seemed appropriate as I joined the couple of dozen attendees at Tony Claydon’s lecture on the forecast impacts of climate change on the region. Titled ‘Swimming in the Shopping Mall’, the former Northumbria University academic took his audience on a journey through the scientific evidence for global warming and how it could impact on the lives of those from Berwick down to Teesside. A series of maps and photomontages presented the shocking possibility that large areas of our coastline will be significantly affected by sea level rises caused by melting ice at the poles, although the timescale for such change is difficult to assess. 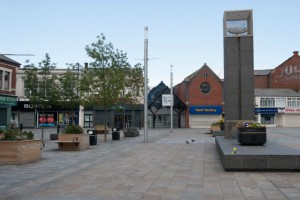 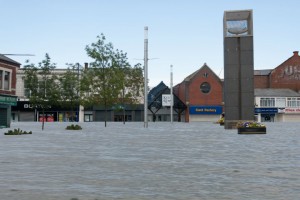 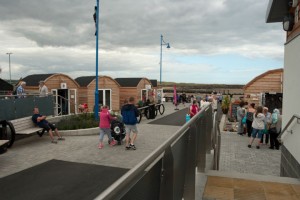 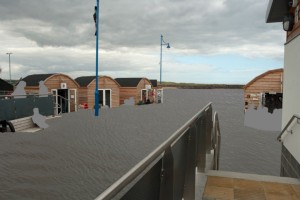 Talking after the lecture, Tony explained how he’s been involved with setting up ACT!, an umbrella body of local campaign groups in the North East. By bringing together a myriad of organisations including local Friends of the Earth groups, Green Party branches, and representatives from the region’s universities, ACT! is helping to bring a unified voice to calls for our politicians and policy makers to act decisively. One of their first ‘acts’ was to organise a climate march last year in Newcastle, but they have bigger plans for this Sunday.

With help from Avaaz, ACT! have been planning a climate march bigger than any the region has seen to date. Tony and his colleagues are encouraging as many people as possible to join the event. The purpose of the march is to encourage local governments in the region to give greater priority to climate policies despite the effects of austerity and cuts in their budgets. It will also contribute to the global campaign to mandate our representatives in Paris to reach an ambitious and legally-binding deal that will make drastic reductions in greenhouse gas emissions. 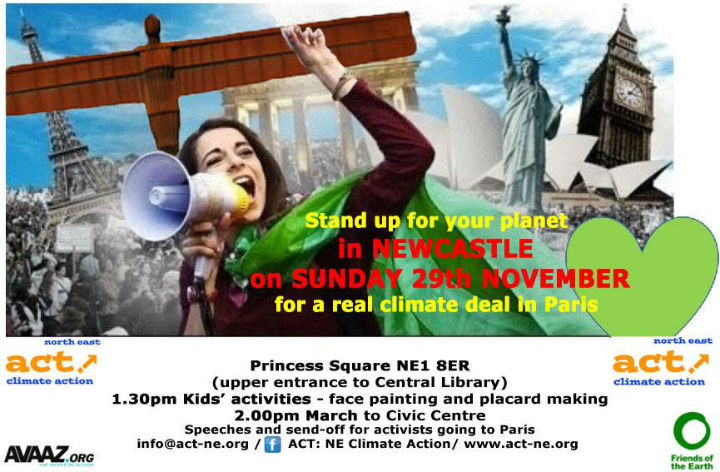 On Sunday 29th November, the Newcastle Climate March event will begin in Princess Square, NE1 8ER, at 1.30pm with face-painting and placard-making (under cover) for young people. Participants are requested to wear something green, to be prepared for dodgy weather, and to follow the instructions of the marshalls. Full details can be found on the ACT! website.