Peter Coverdale showed me around Cross Lanes and explained the holistic approach he’s taken since he started the project ten years ago. Peter and Sue Coverdale, who also run a local stone masonry business, bought the Cross Lanes site as a derelict pig and poultry farm, and set about transforming it into an environment-friendly farmshop, cafe and horticulture centre. They opened their doors to the public in October 2011. 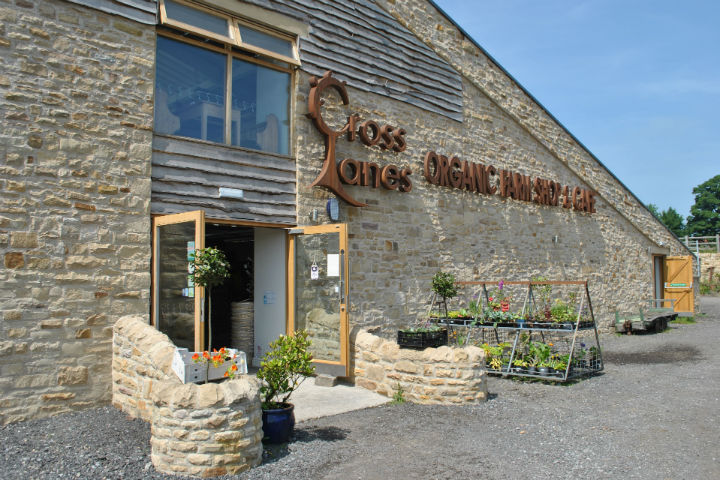 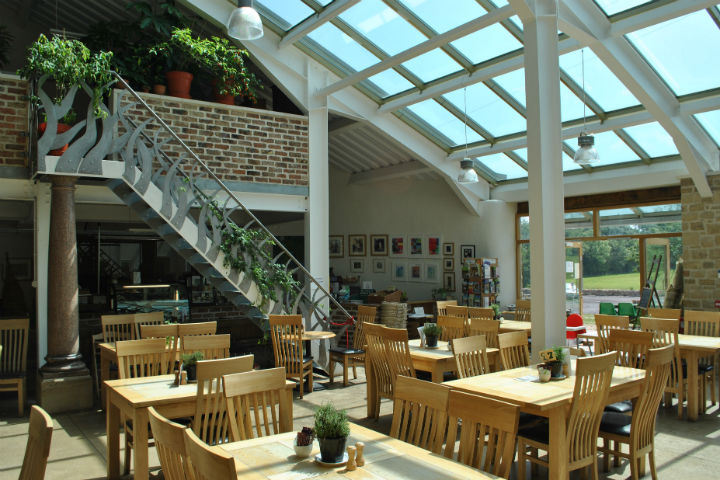 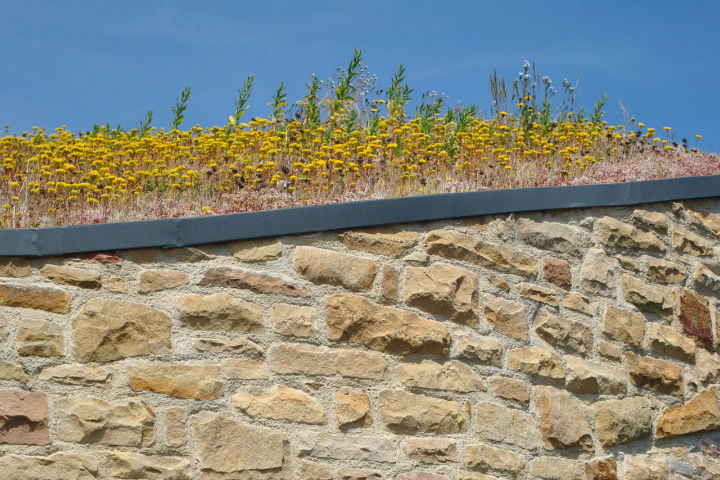 This use of low-impact, reclaimed and recycled materials is a common theme at Cross Lanes. Customers won’t miss the shelving made from old tractor tyres, or the steel fire escape stair mounted on a marble column, both rescued from demolition sites. ‘It’s not a scrapyard,’ Peter assures me, ‘but I wanted to demonstrate that rubbish can become something classy’. Less obvious are the toilet cubicles made from recycled plastic bottles, and the shelving system in the farm shop which was picked up when Woolworths in Barnard Castle closed down in the recession. Durability and recyclability were also considered. Peter chose steel rather than timber for the building’s frame because of its simplicity, strength, and the fact that it will be readily recycled when the building reaches the end of its life. 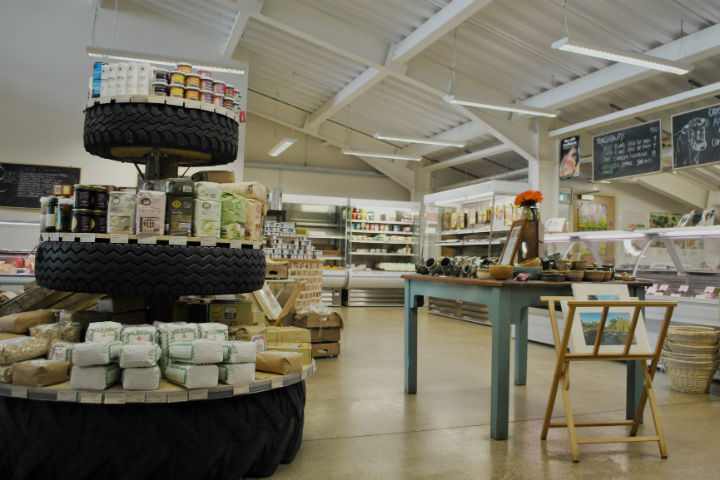 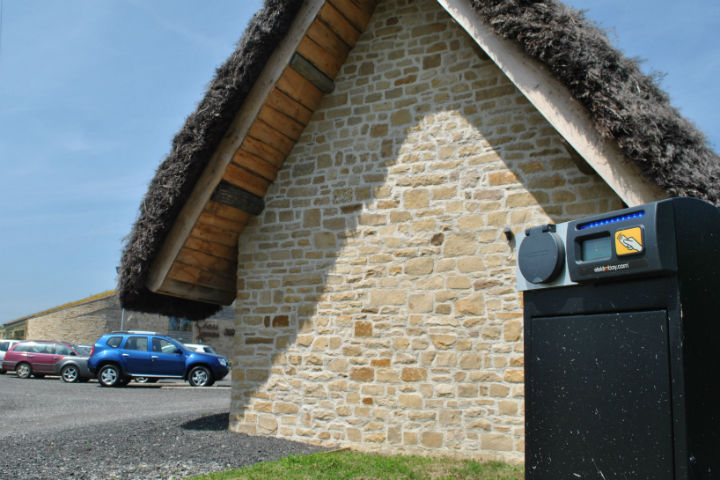 Those glasshouses are used to grow herbs and salads for the cafe. Continuing the theme of passive solar design, Peter has installed a subterranean heat store. Hot air is drawn from beneath the roof down into the ground using a low-energy fan linked to a network of buried land drains integrated between scrap concrete railway sleepers. When the temperatures in the glasshouses drops, the heat can be recycled, avoiding the need for frost protection. My last visit was on a day when there was snow lying outside, but lemons were ripening inside, and salads were growing well. 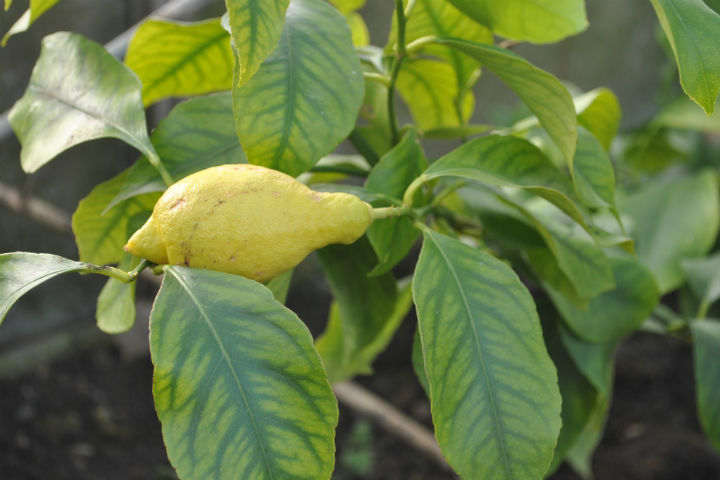 They didn’t get everything right first time at Cross lanes, and Peter admits to learning as he goes along. They’ve recently added solar control film to the roof glazing to cut out excessive solar gain. The internal summer temperatures were bearable for customers, but played havoc with the farm shop’s refrigeration. Similarly, extra filtration has had to be added to the rainwater harvesting system because toilet cisterns were clogging up. Sharing this knowledge, and his passion for sustainability, is important to him. The building’s environmental features are explained on their website, and in leaflets available to customers at the tills. Information signboards are planned. The education offering is soon to be extended with a new classroom comprising a reused modular building which is being clad in straw bales on a foundation of earth rammed car tyres, a technique favoured by Garbage Warrior Michael Reynolds who I have written about recently. 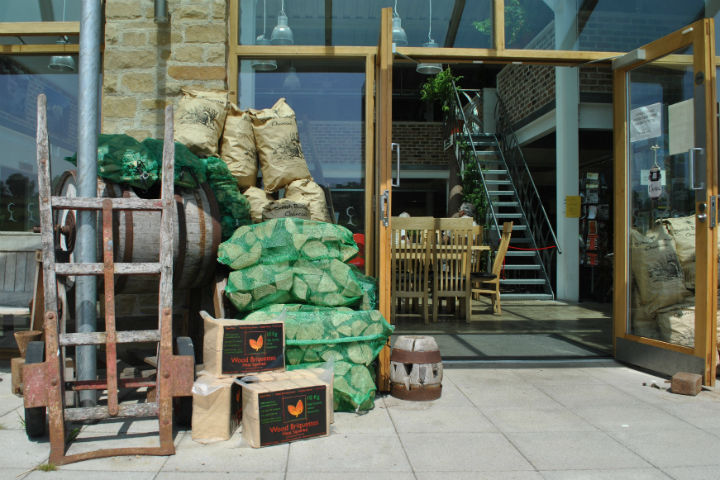 Peter’s enthusiasm for the Cross Lanes is engaging, and whilst the farm shop and cafe have been up and running for over three years now, the strategy seems to be, ‘lots done and lots more to do’, as this environmental enterprise develops further.